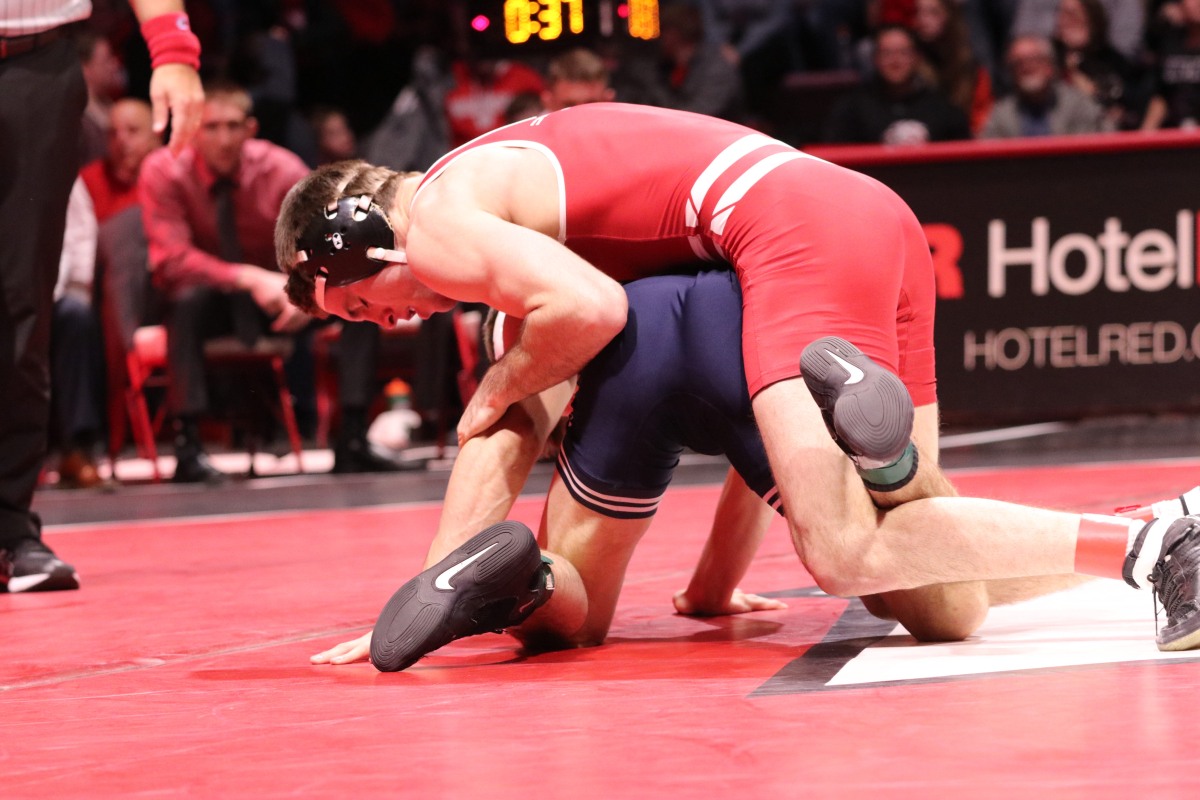 The No. 9 Badgers (10-4, 3-4 B1G) won just three matches, dropping six of the last seven bouts en route to their second home loss of the season.

Wisconsin got off to a quick start thanks to their lightweights.

Eric Barnett put Bucky ahead 3-0 after the opening tilt thanks to his 4-0 win over Penn State’s Brandon Meredith.

Next came the first of several top-5 showdowns as No. 1 Seth Gross extended UW’s lead with a 6-5 decision against No. 4 Roman Bravo-Young.

For a fleeting moment, it looked like it was going to be a quick match. Gross scored the first takedown and picked up a pair of back points to go with it thanks to a cradle. He was eventually reversed by Bravo-Young to make the score 4-2.

At that point, action was stopped as UW head coach Chris Bono challenged the ruling of two back points, hoping that Gross would be awarded four. The original call on the mat was confirmed with the official stating Bravo-Young’s shoulders were too high off the mat for back points to be scored.

“I thought it was four. I felt that, as I kind of got into that position, he got closer to his back, if anything, but the ref said otherwise” Gross said. “It happens. You can’t count on the ref to get everything. It was what it was. You have to keep wrestling.”

Gross held what was, effectively, a one-point lead entering the third due to Bravo-Young’s riding time.

The wrestlers started the final period from neutral.

Bravo-Young got in deep on a late shot attempt, but Gross was able to stand his ground and secure the victory.

“I don’t think I had my best performance and I need to get better off of this. I have a lot of things to work on,” said Gross. “That was a really fun match. I’m looking forward to wrestling Roman in the future.”

Gross’ head coach think’s that future matches with Bravo-Young may look a little different than Friday’s bout did.

“I think Gross is out there experimenting, I don’t know if you know what I mean,” Bono said. “I don’t think Gross showed everything tonight. Let’s just leave it at that.”

Penn State took its first lead of the night after Jarod Verkleeren upset No. 13 Cole Martin 3-2 at 149 pounds. That gave the visitors a 7-6 lead, four bouts in to the dual.

“I think we had two stalemates when we were on the leg,” Bono said. “We finish one of them, I think we win that match.”

Garrett Model gave Wisconsin some momentum heading into intermission. He earned the Badgers’ lone bonus-point victory with a 13-4 major decision over Bo Pipher.

Model was able to fend off a cradle attempt by Pipher on the edge in the early going. That proved to be the turning point of the match.

“That’s one of those positions that I don’t practice … and I definitely don’t like to be in that position,” Model said. “But I’m comfortable there when I do get in those positions. So I kind of have a feel of what to do when I get into that position and I was aware that I was on the edge of the mat. So being able to roll was helpful.”

The redshirt sophomore out-scored his opponent 9-2 over the final four minutes.

It was Model’s first appearance in the starting lineup since the Dec. 1 dual against Iowa.

“Drew [Scharenbrock] got a little dinged up last week, has a little minor injury,” Bono said.  “We thought it was in the best interest of Drew, and trying to keep him healthy for the stretch run, to sit him today.

“Garrett looked unbelievable. Garrett may have just put himself right back in the race to see who our guy is there. I’m proud of Garrett, man. We have a little bit of depth at [1]57 and that’s what we’re trying to do. If a starter goes down, we have to have the next man up to get ready. And that guy went out and got bonus points for us, which could have been a big deal if we won those toss-up matches.”

From there, it was all Penn State.

The much-anticipated matchup at 165 pounds between No. 1 Vincezo Joseph and No. 4 Evan Wick was dominated by Joseph who grabbed an easy 8-0 win that included 4:08 of riding time.

“Evan’s a student of the game. Evan got ridden for four minutes,” Bono said. “We’ll go back and correct it. There’s no doubt about it. We’ll get ready for the next match.”

The final ranked matchup of the night also went the Nittany Lions’ way as No. 9 Aaron Brooks edged No. 23 Johnny Sebastian 3-2 at 184 pounds.

“You can’t leave it up to one takedown in the third period,” said Bono. “You have to go score some points.

When you get two quality guys like that, it could come down to one takedown. But we have to be the ones getting after it. We were in deep one time, but [Brooks] did a good job of stalemating us.”

Wisconsin forfeit heavyweight for the first time this season.

Fifth-ranked Trent Hillger left last Sunday’s dual against Purdue with an apparent head injury. However, Bono stated in his post-match press conference that Hillger’s absence from the lineup was due to illness and was not related to the previous head injury.

“We did what’s best for the athlete tonight,” said Bono. “There’s no need to put him out there when there was nothing at stake. We did what was best for him.”